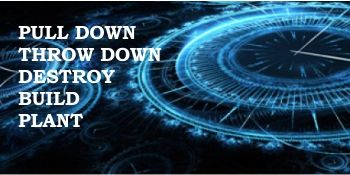 What is a prophet and prophetic ministry? Prophets pull down, throw down, destroy, build, and plant. As a seer, they are spokesmen, messengers, watchmen, and ambassadors standing in the gap and making up the hedge.

Christ set in the Church five distinct ascension gifts of apostles, prophets, evangelists, pastors, and teachers. All of them are quite different, distinct and carry different graces needed to equip the born-again believer for effectiveness in life and ministry.

Scripture declares, “And he gave some apostles, and some prophets, and some evangelists, and some pastors, and teachers” (Ephesians 4:11). All five ministry gifts are equally important. We need the apostle. He is a spiritual father, architect, and builder. We need the soul-winning evangelist that reminds us of reaching the lost. We need the pastor who counsels, nurtures and comforts, and the teacher to instruct, tutor, and explain God’s Word and ways. And we need the prophet, God’s voice of edification, exhortation, and comfort. All five ascension gifts have specific graces in their lives that add something important to the born again believer.

LOGOS TO RHEMA
First, "What is a prophet?" Prophets are gifted with living (rhema) word to the Church. Your Bible is full of words known as logos, the written Word. Have you ever read your Bible and suddenly the words sprang to life, and you received a revelation of what you just read? That is an example of the word (logos), changing into word (rhema), or life-giving word. That’s what we call spiritual revelation. That revelation is available for you.

Prophets flow in revelation or rhema.

“He that hath an ear let him hear what the Spirit saith to the churches.” (Revelation 2:29)

We need to listen to what the Holy Spirit is saying to the Church, not just what the Spirit hath said. We need the freshness of prophetic revelation, that life-giving rhema, that comes through the prophet’s gift. Without that refreshing, we die a boring religious death and are not spiritually relatable to our generation. We all need the prophetic voice to come into the earth that we might have a “living word” imparted to our lives. Without the life provided by the prophetic voice, the Church would be like the dry bones in Ezekiel’s vision.

ROOT OUT
Prophets carry a great sense of spiritual authority. They enjoy rooting out, pulling down, and destroying all spiritual opposition that gets in the way of the plans and purpose of God.

“See, I have this day set thee over the nations and over the kingdoms, to root out, and to pull down, and to destroy, and to throw down, to build, and to plant.” (Jeremiah 1:10)

NEXT LEVEL PROPHETIC MINISTRY TRAINING
WHAT EVERY PROPHET NEEDS TO KNOW


Prophets make some people nervous, and they will try to get rid of the prophet or close his mouth before he gets to do what he is best at, building and planting. God builds by His Spirit, and there are many spiritual obstacles that must be dealt with before the building and planting begin. When we understand the prophet’s gift, we can all be more effective when warring against the spiritual forces that oppose the establishing and advancement of the Kingdom of God.

BREAKING PLOWS
The Holy Spirit uses Christ five-fold ascension prophets as spiritual plows to break the hardest of sin-blackened soils and cut the deepest furrows within the heart of man. The prophet is gifted to prepare the way toward spiritual breakthrough through his rotor-rooter challenge of any spiritual opposition that might get in the way. One reason some feel uncomfortable with prophetic operations is because of the results of the prophet’s prayers.

What the prophet attacks through intercession in the Spirit will sometimes reveal itself in the natural. If he attacks rebellion, for example, then any common ground with rebellion in the people will manifest. But rather than stop the prophet’s rooting out intercession, we should continue to press in and let that prophetic grace finish its work. Once the spiritual warfare is finished, the prophetic gift will open the heavens to us. Remember when Daniel was battling the principalities and powers? Because he didn’t give up and quit the angel was able to get through with the Word of the Lord for the nation.

Sometimes when the prophet speaks, people get stirred, troubled or offended. Offenses are the bait of Satan used to unplug you from important spiritual relationships. If you are being challenged, perhaps the Holy Spirit is trying to prepare you for your future. I have seen the prophetic gift in action used to prune out the dead wood that keeps us from growing. Pruning is good for us all because pruning is necessary to produce more fruit. Currently, we are at a time when the Church is being challenged to awaken from its sleep. Roots of binding religious traditions are being pulled out because some have been sitting in religious comfort zones for too long. As the “restoration of all things” continues so will the restoration of true prophetic ministry.

The Church is moving forward. From be healed, for example, to be taught. And from being blessed, to be changed. Everybody likes to be healed, taught, and blessed because it requires little of the hearer. But the restoration of the prophetic moves the Church into a governmental authority that requires more of us. All believers are called to govern. They are a priesthood of kings given spiritual authority that enables them to be more than conquerors. In the days ahead prophets will be more involved in activating the spiritual authority of every believer to make a difference with their lives.

Prophetic ministry is a wonderful gift from God. Moses said, “Would God that all the Lord’s people were prophets and that the Lord would put his spirit upon them” (Numbers 11:29). With them, Jesus said, “I will build my Church, and the gates of hell shall not prevail.”